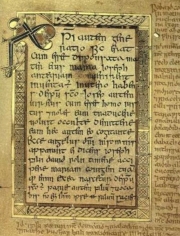 Remember the 2011 film Anonymous that questioned the authorship of Shakespeare’s plays?  It argued that William Shakespeare was just a front man for the true author, Edward de Vere, the Earl of Oxford.  Modern historians have proposed several candidates besides Shakespeare himself, who some have argued was illiterate.

So we don’t know who was perhaps the most famous and influential author in the English language?  Shakespeare only died in 1616, we have a good understanding of the times, and he wrote in Early Modern English, and yet there remains a gulf of understanding that we can’t reliably cross.

And we flatter ourselves that we can cross the far more daunting gulf that separates us from the place and times of Jesus so we can accept the far more incredible claims of the gospel story.

Let’s see how reliable our modern New Testament is.  We’ll follow it back in time to track the tortuous journey on which it has come.  This post will go back to the Council of Nicaea in 325 CE, and later posts will explore the hurdles between that point and the life of Jesus.

Our first step is to get past the translations.  In English, we have dozens of versions—New International Version, American Standard Version, New American Standard Bible, and so on.  Some Christians prefer the more archaic King James Version even to the point of arguing that it alone is divinely inspired.  Proponents of different versions find plenty to argue about.

Translation is especially difficult with a dead language like New Testament Greek since text examples are limited and there are no living speakers to consult.  Consider an English example: the idiom “have your cake and eat it too” interpreted 2000 years in the future.  Or “saving face” or “kick the bucket” or “throw in the towel” or “get your comeuppance.”  If given only a handful of examples, future interpreters would have to guess at the meanings.

Let’s look at similar problems in the Bible.  Consider the Hebrew word reem, translated nine times in the King James Version as “unicorn.”  For example, “Rescue me from the mouth of the lions; save me from the horns of the reem.”  It’s now translated as “wild ox,” so perhaps we’ve got this one resolved.  But what other rarely used words and phrases have been misunderstood?  With no authority, we have nothing more than our best guesses to rely on.

A bigger question is: what is “the Bible”?  That is, what is canonical, the books accepted as scripture?  The Christian church is not unified on this question.  For example, Protestants accept the fewest books.  The Roman Catholics add two books of Maccabees and Tobit (and others), the Greek Orthodox church accepts those and adds the Prayer of Manasseh and Esdras (and others), and the Ethiopian Orthodox church accepts those and adds Enoch and Jubilees (and others).  In other words, Christian churches themselves can’t agree on what books contain the inspired word of God.

Our next challenge is to find the best original-language copies.  The King James version was based on the 16th-century Textus Receptus (“received text”), which was a printed version of the best Greek New Testament texts known at the time.  More Greek manuscripts have come to light since then, and modern scholars rely on a broader set, so let’s discard the Textus Receptus and focus on those instead.

Many apologists point proudly to the thousands of New Testament manuscript copies we have today—roughly 5000 Greek manuscripts and lectionaries (collections of scripture used during church services) and close to 20,000 manuscripts in other languages (mostly Latin, but also Ethiopic, Slavic, Syriac, and more).  This compares with just 600 copies of the Iliad, our second-most well-represented ancient book.

These are impressive numbers, but too much is made of them.  Many of these are incomplete fragments—especially the oldest and most important—and almost all are far removed from the early church period.  Suppose scholars discovered a library with 1000 previously unknown Latin Bible manuscripts from the 12th century.  This would be quite a find, but these late manuscripts wouldn’t override the content from the best and oldest handful.  Today’s 25,000 copies tell us little more about the originals than would having only the most reliable and complete 25 copies.

While there are fragments of gospels going back to the second century, for complete copies we go to manuscripts such as the Codex Sinaiticus and Codex Vaticanus.  These are our oldest copies of the New Testament, and each was written in roughly 350 CE, perhaps as part of the newly approved canon from the Council of Nicaea.

We’ve still got a long way to go before the events in the life of Jesus.  It’s like we’re looking the wrong way through a telescope.

See all posts in this series here:

9 thoughts on “What Did the Original Books of the Bible Say?”