A couple posts ago, we talked about unicorns.  There are other things that we pretty much know don’t exist.  Some of these were deliberately invented—for example, the Flying Spaghetti Monster, sacred to Pastafarians worldwide, or the Invisible Pink Unicorn, or the new church of Kopimism.

But before those was Bertrand Russell’s teapot.

Bertrand Russell proposed the idea of a teapot orbiting the sun between the Earth and Mars in 1952.  The teapot is too small to detect with any instrument, so it’s impossible to prove this claim wrong.

Russell pushes the teapot contention to the limit:

But if I were to go on to say that, since my assertion cannot be disproved, it is intolerable presumption on the part of human reason to doubt it, I should rightly be thought to be talking nonsense. If, however, the existence of such a teapot were affirmed in ancient books, taught as the sacred truth every Sunday, and instilled into the minds of children at school, hesitation to believe in its existence would become a mark of eccentricity and entitle the doubter to the attentions of the psychiatrist in an enlightened age or of the Inquisitor in an earlier time.

How valid is the comparison of God with an orbiting teapot?  We know that there are teapots, and we know how to put things into solar orbits.  It’s just technology, and an orbiting teapot violates no scientific laws.  But the God hypothesis is far bolder because it demands a new category, that of supernatural beings.  They may exist, but science acknowledges no examples.

Is there such a teapot?  Maybe, but why live as if there is?  We can’t invalidate the teapot hypothesis, but that’s not the same as proving it true or even showing that it’s worthy of consideration. 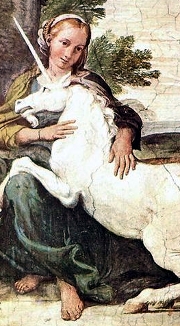 A chapter in Carl Sagan’s The Demon-Haunted World (1995) is titled “The Dragon in My Garage.”  In the spirit of Sagan’s story, here is an imagined exchange between you and me about my unicorn.

Me: I have a unicorn in my garage!

Me: You don’t want to just take my word for it?

You: Of course not—I want to see.

(I open the garage door.)

You: Uh … this garage is empty.

You: Okay … can you make him make a sound?

You: Can we see food vanish as he eats it?

Me: Of course not—he’s magic.  He doesn’t need food.

(You wander through the garage with your hands out in front.)

Me: What are you doing?

You: Trying to feel for it.

Me: Uh … no—he’s really small and he scampers away.

You: Can you hear him running?  Like the sound of hooves on concrete?

Me: No—I told you he’s silent.

You: Well, how about spreading flour on the floor so we can see the footprints.

Me: Nope.  He can float.  And I’m sure he would, because he doesn’t like to be detected.

You: Can we can catch him with a net and weigh him?  Can we put a sheet over him so I can see him moving underneath?  Could we spray paint and see it on his body?

Of course, by now you’ve lost interest in this “unicorn.”  Still, you haven’t been able to falsify my claim.  I win!

But no one would accept this conclusion.  By slithering away from every possible test, this supernatural claim has no evidence in support of it.  Any unicorn that has this little impact in the world is pretty much the same as no unicorn at all.  We can’t prove it’s nonexistent, but it’s functionally nonexistent.

“You haven’t been able to falsify my claim” is true, but this is backwards reasoning.  The proper conclusion is: There is no evidence to support this claim, so there’s no reason to accept this claim.

Isn’t this how Christians evaluate the miracle claims of other religions?  Why not handle those of Christianity the same way?

Jesus is Santa Claus for adults
(seen on a bumper sticker) 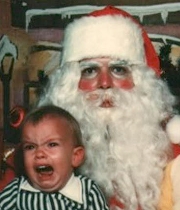 Harriett Hall (the SkepDoc) wrote a clever story about two kids trying to figure out whether the tooth fairy really exists or not.  Inspired by that, and in keeping with the season, I’d like to imagine two kids arguing about Santa.

It was early December, and little Jerry had begun to doubt the existence of Santa Claus.  He made his case to his younger brother Kyle.

“Okay, why are there all those Santas on the street corners ringing for money?  How can Santa be at all those stores at once?”

“They’re not the real Santa, just his helpers,” Kyle said.  “And maybe they’re just testing us to see if we’ll still believe.  I’m going to believe, because if you don’t, you don’t get presents.”

“But I recognized one of them—it was the father of one of my friends.”

“Then those are just ordinary people imitating Santa, raising money for a good cause.  Anyway, I’ve seen Santa on TV at Thanksgiving—everyone has.”

Jerry sees that he’s not making any progress, so he gives up.  On Christmas afternoon, he’s alone with Kyle and tries again.  “Remember that video game that you told Mom about and then you forgot to tell Santa?” Jerry said.  “But you got it anyway.  Mom must’ve bought it and written on the package that it came from Santa.”

“But how can Santa get around the world in one night?”

“My friends all say that Santa is real.  Anyway, Santa has magic.  And the cookie plate we leave out for Santa always has just crumbs on Christmas morning.”

“With the Junior Detective kit that I got this morning, I dusted the cookie plate for fingerprints, and they were Mom’s.”

“Mom set out the plate, and Santa wears gloves.”

Jerry gives up for the year.  On Christmas afternoon the next year, he tries again.  “Lots of the older kids don’t believe in Santa.  They say that their presents only come from their parents.”

“Sure,” Kyle said.  “Santa only gives presents to those who still believe in him.”

“A few months ago, I was snooping in Dad’s sock drawer, and I found every letter we ever wrote to Santa.”

“Why not?  Santa didn’t need them anymore and each year just gives them to Mom and Dad for keepsakes.”

“The only fingerprints on our presents are Mom’s or Dad’s.”

“Mom and Dad always get up early on Christmas.  They could’ve rearranged them.”

“Last week, I found all our presents hidden in a corner in the attic.”  Jerry pawed through some of the torn wrapping paper.  “I wrote my initials on the bottom of each package.  And look—here they are.  That proves that Santa didn’t bring them here last night.”

“I asked Mom, and she said that Santa is real.  Anyway, how do I know you didn’t write your initials on the wrapping paper this morning?”

Like little Kyle, if you’re determined to believe something, you can rationalize away any unwelcome evidence.  (By rationalize, I mean taking an idea as fact and then selecting or interpreting all relevant evidence to make it support that idea.)

It’s tempting to list the many ways Christians rationalize.  They rationalize away contradictions in the Bible, the oddity of a hidden God, or why so much bad happens to the people God loves.  They can find a dozen reasons why a particular prayer wasn’t answered, even though the Bible promises, “Ask and ye shall receive.”  But the Christian says that he’s simply defending the truth: “I’m not rationalizing; I’m right.”

In five minutes we can see flaws in others that we don’t see in ourselves in a lifetime.  Perhaps this episode with Jerry and Kyle will encourage us to see our own rationalizations.

I recently came across the Galileo Was Wrong; The Church Was Right blog.  That’s right, it argues for geocentrism, an earth-centered universe.  With a little work, even the nuttiest theory can be given a scholarly sheen, so imagine what a few thousand years of scholarly work can do to a religion.  Any Christian can point to centuries of scholarship to give a patina of credibility to their position (but, of course, so can Muslims, Hindus, and those in many other religions).

I can’t prove Santa doesn’t exist.  Nor can I disprove the existence of leprechauns, Russell’s Flying Teapot, the Flying Spaghetti Monster, or God.  The thoughtful person goes where the evidence points rather than accepting only the evidence that supports his preconception.

And Jesus is Santa Claus for adults.

In an article titled “Turn an Atheist Objection to an Opportunity,” apologist Greg Kokul attempts to turn the Problem of Evil, often admitted by Christians as their biggest challenge, into a selling point for Christianity.

The Problem of Evil is this: how can a good and loving God allow all the bad that happens in the world?  The simplistic answers fail to explain the woman who dies leaving young children motherless, the child that dies a lingering death from leukemia, or the Holocaust.

Kokul begins by saying that he’s found a debating technique that turns this problem into a benefit.  Instead of being solely a problem for the Christian, he turns the tables on the atheist.

Evidence of egregious evil abounds.  How do I account for such depravity?

But, I am quick to add—and here is the strategic move—I am not alone.  As a theist, I am not the only one saddled with this challenge.  Evil is a problem for everyone.  Every person, regardless of religion or worldview, must answer this objection.

What if someone is assaulted by personal tragedy, distressed by world events, victimized by religious corruption or abuse, and then responds by rejecting God and becoming an atheist (as many have done)?  Notice that he has not solved the problem of evil.

The atheist hasn’t solved the Problem of Evil; he’s eliminated it.  A God who loves us infinitely more than we love ourselves and who stands idly by as rapists or murderers do their work is no dilemma for the atheist.  But, of course, the problem still remains for the apologist.  Kokul can’t simply END_OF_DOCUMENT_TOKEN_TO_BE_REPLACED