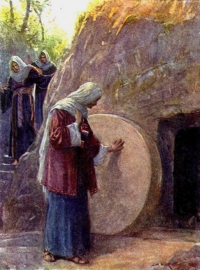 Let’s consider an incident from that first supposed Easter.  All four gospels say that women were the first to discover the empty tomb.  (Of course, who was actually at the tomb varies by the gospels, as do many other important details about the resurrection, which makes the gospels unreliable as history.  But let’s ignore that for now.)

Many apologists point to the women as an important fact arguing that the gospels are reliable.  Greg Koukl says:

Women, disrespected in the ancient world, are the first to witness the risen Christ.  Why include these unflattering details if the Gospels are works of fiction?

I don’t know who argues that the gospels are fiction.  I don’t think they’re history, but I certainly don’t think that they were deliberately invented.  But let’s set that aside as well.

The discovery of the tomb by women is highly probable.  Given the low status of women in Jewish society and their lack of qualification to serve as legal witnesses, the most plausible explanation … why women and not the male disciples were made discoverers of the empty tomb is that the women were in fact the ones who made this discovery.

That is, having women make this momentous discovery is embarrassing.

This is an application of the Criterion of Embarrassment, which argues that you’re likelier to delete something embarrassing than add it to your story.  And if a story element is embarrassing, that points to its being historical fact.

But what’s embarrassing?  Things that look embarrassing to us may not have been so to the author.  For example, all four gospels show Peter denying Jesus three times.  That’s pretty embarrassing … or is it?

Paul’s relaxed approach in converting Gentiles conflicted with the more traditional approach of Peter and James (the conflict is shown in Galatians 2:11–21, where Peter is called “Cephas”).  Maybe supporters of Paul built their case by circulating a story in which Peter looks foolish, and this story became part of the canon.

So our question becomes: is it embarrassing to have women discover the empty tomb?  These apologists certainly think so, and historical records agree on women’s unreliability.  Josephus, a first-century historian, stated, “Let not the testimony of women be admitted because of the levity and boldness of their sex,” and the Mishnah (a Jewish legal text written in 220 CE) concurs.

However, this flimsy argument is much more popular than it deserves to be.  I’ll respond in several ways.

Give the original authors credit for being good storytellers.  As plot twists go, having women make the discovery instead of men isn’t particularly shocking.  But if you find it a powerful argument for the truth of the story, then you can imagine why that element might have become attached to the story.

The gospel story wasn’t made up.  The point that women were unreliable witnesses is relevant only in rebutting the charge that the story was deliberately invented, a claim I don’t make.  I’ve never heard this hypothesis except by apologists.  Instead, what best fits the facts for me is that the story documented in the gospels (in incompatible versions, but that’s another story) is the result of forty or more years of oral history.  Each gospel is a snapshot of the tradition of a different church community in widely different places (perhaps Alexandria, Damascus, or Rome?) and over decades of time.

Believers might demand, “Well, how do you explain the empty tomb?”  But of course, that assumes the accuracy of the gospel story to that point.  It’s like saying, “How do you explain Jack’s cutting down the beanstalk any other way than that there really was a giant climbing down after him?”

Who cares about women’s “unreliability”?  Women discover the empty tomb, they tell men, the men verify the story, and then the men spread the word.  If you don’t like women as witnesses, you’ve got the men.

That women were less reliable as witnesses in court doesn’t matter because there is no court in the story!  The women were trustworthy where it mattered—in conveying the story to people who knew and trusted them.

Tending to the dead was women’s work in this culture.  Instead of women discovering that Jesus had risen, imagine this incident:

On the first day of the week, at early dawn, Simon Peter and James entered the kitchen to prepare bread for the community.  In the darkness of the kitchen, a voice called out to them saying, “Why do you tend to minor matters when there is the LORD’s work to be done?”  And they took hold of His feet and worshiped Him.

What’s wrong with this story?  It’s that preparing bread is women’s work in this culture.  It makes no sense to have men come across Jesus in the kitchen.  And the same is true for men dealing with the dead.  According to the Women in the Bible web site:

It was the women’s task to prepare a dead body for burial. … Tombs were visited and watched for three days by family members. On the third day after death, the body was examined. … On these occasions, the body would be treated by the women of the family with oils and perfumes. The women’s visit to the tombs of Jesus and Lazarus are connected with this ritual.

Mark focuses on reversals, and the other gospels followed Mark’s lead.  Richard Carrier gives a detailed discussion of this topic and argues that a the-last-shall-be-first philosophy led Mark to add this touch.

Given Mark’s narrative agenda, regardless of the actual facts, the tomb has to be empty, in order to confound the expectations of the reader, just as a foreign Simon must carry the cross instead of Peter, a Gentile must acknowledge Christ’s divinity instead of the Jews, a Sanhedrist must bury the body, and women must be the first to hear the Good News.

He continues with a fascinating hypothesis about the relevance of the names of the three women that Mark places at the empty tomb.  You can read the argument and decide for yourself if it’s well founded.

Seeing the gospel story as no more supernatural than any other myth from the past best explains the facts.

3 thoughts on “Women at the Tomb? Weak Evidence for the Resurrection.”