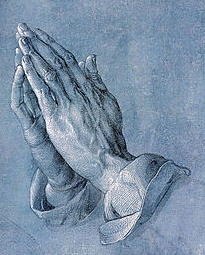 This is an excerpt from my book, Cross Examined: An Unconventional Spiritual Journey. A bit of background: Jim is a wealthy, housebound, and somewhat obnoxious atheist, and Paul is the young acolyte of a famous pastor, doing his best to evangelize. It’s 1906 in Los Angeles, and they’re in Jim’s study.

“Have you thought much about how prayer works?” Jim asked.

“The Bible tells us how: ‘Ask and ye shall receive.’”

“Does it really work that way? You just ask for things and then you get them?”

Paul breathed deeply to focus his mind. He had to think clearly. Jim’s arguments always seemed to trap him. “Well, no, of course not. And that frustrates some Christians. They don’t understand that they need to let God’s plan unfold for them. It may simply not be part of God’s plan to give you what you ask for right now. You can’t treat God as an all-powerful servant always at your elbow, fulfilling every whim that comes to mind. God isn’t a genie.”

Several white chess pieces—three pawns, a knight, and a bishop—lay on the center table. Though the table was not marked with a chessboard, Jim leaned forward and set them up on the table in their beginning positions. “Perhaps not, but ‘ask and ye shall receive’ is pretty straightforward. It makes God sound like a genie to me.”

“But that’s clearly not how prayer works.”

“I agree, but the Bible doesn’t. It makes plain that prayer is supposed to work that way—you ask for it, and then you get it. Prayer is a telephone call to God, and he always answers your call.”

“No—you’re misreading the Bible. It doesn’t say when you get it.”

Jim shook his head. “But it does say that you’ll get it.”

Paul tried another tack. “God answers every prayer, but sometimes the answer is No.”

“Fine,” Paul said, clenching his teeth. “Fine.” He hated conceding ground, but he had no response.

“Okay,” Jim said, “let’s look at another aspect of prayer. When you pray, are you telling God something he doesn’t already know? That is, is prayer important because you’re informing God of some news, like ‘I’ve lost my job’ or ‘my brother has consumption’?”

“So you need to change it to ‘please help me get this new job’ or ‘please cure my brother’s consumption’?”

Jim leaned forward. “But even this doesn’t make sense. God knows what’s best for you. For you to ask God to change his plans is presumptuous. It’s like an ant giving an engineer tips for designing a bridge. Will God think, ‘It’s best that you not get the new job, but since you asked nicely, I’ve changed my mind’? And maybe it’s simply part of his plan that your brother die from consumption.”

“But prayers are answered all the time! Lots of consumption patients can point to God as the reason they’re alive now.”

“Not with any justification. Let’s say Aunt May has an illness. She and her family pray, and then she gets well. She concludes that it was prayer and God’s intervention that cured her. But obviously there are other explanations, such as, that her treatment saved her. And if she had no treatment, perhaps it was simply her body healing itself.”

“And perhaps it was God!” Paul ached to pace around the room to burn off some of his tension, but he was a guest and thought better of it.

“Perhaps so, but you’re basing that on no evidence. I agree that we can’t rule out that it was God—or Vishnu or Osiris or a four-leaf clover. But we have no evidence that any of them did anything.” Jim was quickly running through different opening moves for his five chess pieces—tick, tick, tick as the pieces quickly struck the table, then a pause as he set them up again.

Paul wondered if his responses were so bland that Jim needed to play chess to keep his mind occupied.

Jim looked up and said, “The attraction of prayer in many cases is that it’s easier than doing the hard work yourself. Praying for a promotion is easier than doing what’s necessary to deserve a promotion. But let’s look at this from another angle. God has cured zero cases of birth defects—say, mental idiocy. We know this because zero cases have been cured by any cause, natural or supernatural. Millions of mothers have been devastated by the prospect of their children growing up with a disability or even dying an early death. Has God found none of their prayers worthy of an answer? Or amputations—there are probably men in your own church who have lost limbs due to war or injury. Has a single limb ever grown back? No. And since God has cured zero of these, maybe he has intervened in zero illnesses. That is, since God hasn’t performed any visible cures, maybe he hasn’t done any invisible ones, either.

“And think of the millions of people around the world who are starving. Prayers or no prayers, God apparently can’t be bothered to help them. If God is going to set aside the laws of physics and perform a miracle, is he to put my needs at the top of the list? If he won’t save a country starving during a famine, why should I think he’ll cure my rheumatism?”

Jim expanded his diversion, adding opposing black chess pieces to his imaginary board—three pawns and a knight from the other side of the table. He alternated moves from each side and held the captured pieces between his fingers so that the round bottoms embellished his hands like fat wooden rings.

“Consider smallpox,” Jim said as he set up the pieces for another mock game. “We don’t think of it much now, but it has been one of civilization’s most deadly diseases. In fact, the last smallpox outbreak in this country was here in Los Angeles, about thirty years ago. Suppose you have a large number of people who are vaccinated against smallpox and an equally large number who aren’t, and both groups are exposed to smallpox. Those who were vaccinated will do far better than those who don’t—regardless of who prays. You can look at this from the other direction—the high death rate from smallpox suggests that God’s plan is for it to be deadly. That is, vaccines interfere with God’s plan. Maybe we shouldn’t be using them.”

Every confident tick of a chess piece was a goad to Paul, a reminder that he was the novice in this discussion. Tick, tick, tick became “i-di-ot.” He said, “Maybe God doesn’t need to focus on smallpox anymore because science has stepped in. Maybe He’s focusing His miracle cures on diseases like consumption or cancer because that’s where the need still exists.”

“Did God ever focus on people with diseases?” Jim tossed away the chess pieces, and they clattered on the table. “Before vaccines, smallpox was life threatening. It killed hundreds of thousands of people every year. But in America, it’s now just a nuisance. Science has improved life expectancy; prayer hasn’t.”

Paul clenched the arms of his chair. “You can’t judge prayer with science,” he said, probably louder than he should have. “You can’t expect God to perform like a trained monkey at your command. It’s not our place, nor is it even possible, to judge God’s work. I agree that there are aspects of God’s actions that we just can’t explain. But I have the patience and the humility to accept God’s wisdom and wait for understanding. Perhaps I won’t understand until I get to heaven.”

“Fine, but if your argument is that you don’t understand, then say so. When asked, ‘Can we say that prayer gives results?’ the correct answer must then be ‘No, we cannot because we don’t understand.’ God might answer every prayer as you suggest, but we have no reason to believe that. A sufficient explanation is that prayers don’t appear to work because there is no God to answer them. The invisible looks very much like the nonexistent. Which one is God—invisible or nonexistent?”

Paul had no clever rebuttal, so he treated the question as rhetorical. “You’ve ignored praise,” he said. “That’s a vitally important reason for prayer. We humble ourselves before God and acknowledge that He can do what we can’t. It’s only appropriate to give thanks and praise to God.”

Jim snorted. “What’s the point in praising God? Surely God doesn’t need to hear how great he is. Is he that insecure that he needs constant reminding? Put this in human terms—do we curse insects for not acknowledging how important we are? Suppose we built a race of mechanical men. Would our first command to them be that they need to worship their human creators?”

“Are you unwilling to humble yourself before a greater power?”

“I’ll consider it when I know that such a power exists,” Jim said. “The picture of God that the writers of the Old Testament painted for us is that of a great king—a man with the wisdom of Solomon, the generalship of Alexander, and the physical strength of Hercules. And he apparently needs the fawning and flattering of a great king as well. You would think that God would be a magnification of all good human qualities and an elimination of the bad ones. But the small-minded, praise-demanding, vindictive, and intolerant God of the Bible is simply a caricature, a magnification of all human inclinations, good and bad. As Man becomes nobler, he loses these petty needs. Shouldn’t this be even more true of God?”

Jim leaned down and picked up a rumpled copy of a newspaper from the floor. “Let me show you something I read in this morning’s paper,” he said as he noisily flipped through a section. After a few moments he laid the newspaper on the table. “Here it is. It’s about a train accident in which eight people died. A woman was just released from the hospital, and here she says, ‘The doctors told my husband that I probably wouldn’t make it. But he prayed and prayed. And his prayers were answered—it was a miracle.’” Jim looked up. “So according to this, prayer works. But I must wonder if I understand the meaning of the word ‘works.’ Imagine if the utilities that we use so often—electricity, clean water, trains, mail delivery, and so on—worked no more reliably than prayer.”

“You’re mixing two different things,” Paul said. “You can’t judge the Almighty’s response to prayer in the same way that you judge something as artificial and profane as electricity.”

“Then don’t use the same word to describe their reliability. Prayer clearly does not ‘work’ as electricity does. And to compensate, the rules are rigged so that success is inevitable—if I get what I pray for, that’s God’s plan, and if I don’t get what I pray for, that’s also God’s plan. When a train crash kills eight people, and it’s called a miracle, how can God lose?” Jim slapped his hand on the newspaper. “But this makes praying to God as effective as praying to an old stump.”

Paul’s rebuttal lay scattered about him like a division of troops overrun by Jim’s argument. His fists were clenched, but he felt defenseless. “Are you saying that prayer has no value?”

“Many spiritual traditions across the world use meditation to clarify the mind or relax. Christian prayer can have these same benefits. A mature view acknowledges what you can’t control and can be an important part of facing a problem, but to imagine an all-powerful benefactor helping you out of a jam is simply to ignore reality. None of prayer’s benefits demand a supernatural explanation, and to imagine that prayer shows that God exists is simply to delude yourself. The voice on the other end of the telephone line is your own.”