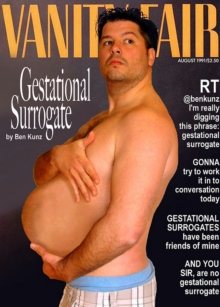 On this, the 39th anniversary of the Supreme Court’s Roe v. Wade decision making abortion legal in the U.S., Pro-Choice America (NARAL) asks, What will you do to help elect pro-choice candidates in 2012?

I will make it easier to be a pro-choice politician by spreading the word about the sensible arguments in favor of the pro-choice position.  My approach has been to post this series of articles on this topic.

Today let’s ask why it’s always men advancing the pro-life position.  It does seem unfair that the gender that isn’t personally inconvenienced by pregnancy is the one pushing the restrictions.  (Okay—it’s not always men who are the vocal pro-life advocates, but it often seems that way.)

I remember a podcast by a popular Christian apologist during which a woman caller asked this question.  The apologist (a man) seemed annoyed.  He said that murder was murder.  (I argue that abortion isn’t murder.)

More to the point, he said that his moral opinion was relevant regardless of his gender.  I’ll agree with that, as far as it goes.  But I think that the woman had an important point that is rarely acknowledged, since only a woman can have an abortion.

Let me try to create a symmetric male-only example.  This apologist is of the age where he might have been in the draft pool during the Vietnam War.  So let’s suppose it’s 1970, and this guy comes back from a tour fighting in Vietnam.  Readjusting to life in America is tough, and he has nightmares and other symptoms of what we now call PTSD.  His wife is sympathetic and, after some prodding, he shares the problem with her.

“Oh, you should go see Dr. Jones about that,” she says.  “I’m part of a community of veterans’ wives, and I’ve heard all about that.  He does wonders with returning soldiers, and he’ll fix you up in no time.”

Our hero hesitates, not comfortable discussing his demons with a stranger.  “I don’t think so.”

“No, really.  I’ve heard a lot about this, and that treatment should work for you.”

Tension increases as they go back and forth.  Finally, he says, “Honey, I really appreciate your sympathy.  I know you want to help.  But you must understand that you will never, ever understand what I’ve been through.  Put in 18 months in Vietnam and then we’ll have something to talk about.  Until then, you really don’t get it.”

Similarly, our 60-something male apologist will never, ever completely understand what it’s like to be 15 and pregnant, faced with disapproving parents and ridicule from classmates and pro-lifers shouting “murder!” at the suggestion of an abortion, wondering how she’s ever going to get her life back on track.

If the male apologist wants to comment on the topic, that’s fine, but a big dose of humility (and sympathy) would make his position easier to take.

Next time: 16 Arguments Against Abortion, with Rebuttals (Part 2)

18 thoughts on “Why is it Always Men Advancing the Pro-Life Position?”