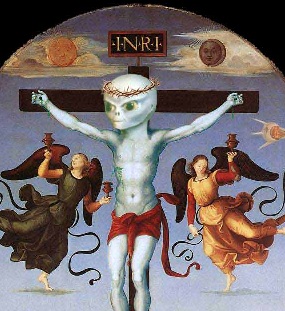 The editor of the New York Times recently published an article called “Asking Candidates Tougher Questions About Faith.”  He opens with this:

If a candidate for president said he believed that space aliens dwell among us, would that affect your willingness to vote for him?  Personally, I might not disqualify him out of hand; one out of three Americans believe we have had Visitors and, hey, who knows?  But I would certainly want to ask a few questions.  Like, where does he get his information?  Does he talk to the aliens?  Do they have an economic plan?

Yet when it comes to the religious beliefs of our would-be presidents, we are a little squeamish about probing too aggressively.

My own view is that religion is off topic.  Candidates for a job as pastor can expect questions about religion.  But for the job of president?  Religious questions are out of bounds.  We’re governed by a secular constitution that includes the constraint, “No religious Test shall ever be required as a Qualification to any Office or public Trust.”

I long for the day when a candidate will dismiss a question about his/her religion with, “That’s irrelevant.  Next question.”  Ask about candidates’ values, their specific plans, their qualifications, and so on, but one’s religion is as relevant and as personal as questions about the style of one’s underwear.

A columnist from GetReligion.org was quick with a response.  She seemed outraged at the Jesus/aliens comparison, but her most substantial comment was to reprint the comparison and state, “I’m not joking.”

Is outrage appropriate?  Which belief—in aliens or Jesus—raises the bigger questions about a candidate’s ability to reason?

Sure, I see the difference between Jesus belief and alien belief.  Jesus is supernatural.  Space aliens are not.  We have nothing to compare a supernatural Jesus to except myths or legends, which sure makes the Jesus story look like a myth or a legend.

On the other hand, aliens aren’t supernatural.  They are life forms (we know about plenty of those) who travel using technology (we know about plenty of that).  Science keeps finding strange new animals on earth living in extreme environments—at the bottom of the ocean, under miles of rock, in glaciers.  Is it so hard to imagine them on other worlds?  Their discovery would be surprising or even shocking, but we wouldn’t need to discard any scientific laws if aliens presented themselves.

3 thoughts on “Jesus and Aliens”